I boarded a bus from Mowe, Ogun state going to Lagos State. Some people will bite me for stating a difference there, saying that to them, Mowe is a part of Lagos State. Worefa, check your map. I live in Mowe, Ogun state, come and beat me. Back to my story, it took what seemed like forever before I got a bus. The traffic jam was very terrible and the transport fare was two times what it should have been. That’s pretty normal whenever the traffic is heavy. It started before Redemption camp on the Ibadan-Lagos expressway. The driver drove roughly and the passengers did not let him be as they rained insults on him, most of them in Yoruba language. Hehehe I trust the Yoruba women. A plump woman who sat right in front of me, with her massive butt cheeks saying hi from beneath the back rest of her seat, shouted at the driver in Yoruba “Ogbeni, ki lo n se e naa? Abi o m’oti yo ni?” (“dude, what is wrong with you? Are you drunk?”) Another replied her “o ro pe malu lo gbe si nu moto” (he thinks he has cows in his bus not humans). Some of the passengers kept shouting at the driver as he tried to avoid the traffic and was passing the side of the road, turning corners and passing where he should not have. Some were shouting in support of his choices, others shouted in disapproval. Different voices, different opinions, put together became noise as everyone seemed to have something to say, telling the driver where to or where not to pass. Poor bald man, he must have been confused. I was unbothered though, I knew I would get to my destination safely and in good time.

I was seated at the back, relaxed. I could say I was the calmest one on the bus. But oh! There was a man who sat just beside the window, by my right, who appeared relaxed too, although he had a tired look. He looked like he was returning from a 7-day fasting and prayer program on one of those Ori Okes (mountain top) as he was eager to patronize a corn hawker and almost dragged them from her before she released them. He offered me a piece of corn, which I politely declined, smiling. The smile was one-cheeked and fake though. He turned away but not before trying to start a conversation but I was not to be disturbed as I was enjoying the book I was reading, ‘This Gospel’ by Chris Segun Onayinka. Again, he turned, and offered me a sachet of water. A part of me wanted to roll my eyes at him and respond with “dude, hope nothing? na by force?” but my at-that-moment-calm-and-nice self simply declined with a “no, I’m okay, thank you”, smiling, this time two-cheeked and real, flaunting my dimples. “Nice man”, I said to myself as I turned away, wondering why we were the only two who seemed less interested in whatever discussion was going on in the bus. I continued the book. The traffic was becoming lighter but the driver was rougher than ever. That bothered everyone except the calm two at the back, of course. I turned to look at my ‘partner’, I pitied him because his body kept hitting the bus as we were budged forward, backward, upward, downward and sideways by the rough road and driver. My ‘partner’ was yet unmoved. He was busy with the roasted corn in his hands. I watched him for a while as he was so engrossed, munching the corn with all his might. It seemed to me like he was trying to chew away his sorrows, every grain of them. “There is more to this man and the corn”, I thought. He looked happy on the outside but deep down I could tell he was going through a lot. I felt like reading his mind but I probably could not even if I tried except I was going to give him what we believers call ‘word of k’ but “no Dammy, read your book!”

The driver drove in to a petrol station to fill the vehicle’s tank and then something happened... 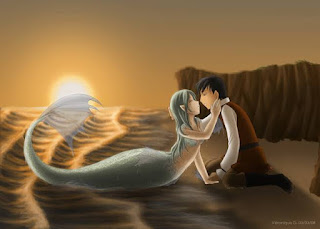 I craved a love so deep I got it... literally  Rivers of affection flowed It made me so cold I only wanted a bowl But my thirst, I could not control I walked by the riverbank  To draw my peace I heard a voice sing my name My hallucinations tried to play a game I have heard about mermaids My grandmother said they are evil But this was the purest being ever Her eyes filled with innocent desire She sang again, softer and sweeter To ignore the voice would be bitter  She left, and I dived into the river  Hoping not to shiver  I swam several feet deep For this goddess, I must keep Joined by love Forbidden by nature To drown or to float? I choose to drown She is the cold water to my thirsty soul  I craved a love so deep I got it... literally ******************* Inspired and edited by Oluwadamilare Sanusi
Read more